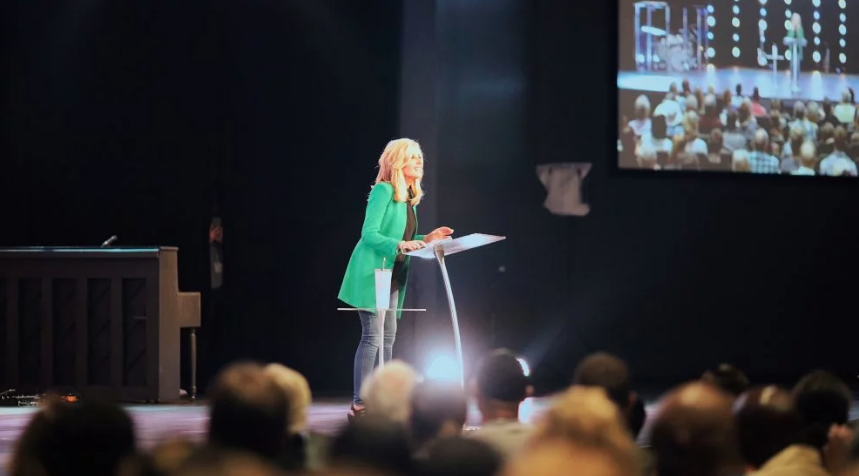 There’s been a lot of buzz surrounding women lately. From Hollywood and #MeToo to Christians and #ChurchToo, women are demanding their voices be heard … and many are listening. Women everywhere are echoing Oprah’s famous line—“A new day is on the horizon!”—from her empowerment speech during Golden Globes.

But naturally, just like everything else in culture, not everyone agrees—particularly when it comes to women’s role in the Church. After John Piper came out with a response stating women should not pastor (or teach), Twitter users took it as an opportunity to promote, encourage and affirm the women who have impacted them in their faith and in their theology. Names of women rolled in for hours and with reason. Historically, women have been crucial aspects of the Church’s growth and spiritual formation. It’s apparent women belong in leadership.
Here are five reasons why:
1) WOMEN WERE FOUNDATIONAL TO THE SPREADING OF JESUS’ MESSAGE.

Not only was “the woman at the well” the first evangelist to Samaria, and the women at the tomb the first witnesses and proclaimers of Jesus’s resurrection, but Mary of Bethany was affirmed by Jesus as “doing the right thing” in “sitting at Jesus’ feet.” In antiquity, “sitting at the feet” literally meant “being a disciple.” Even Paul, during his ministry made mention of several leading women in his salutation to the Roman Church (Romans 16). Among these were Junia the apostle and Phoebe, Paul’s emissary and the translator of the letter. We also know of several house-church leaders like Chloe and Nympha (1 Corinthians 1:11, Colossians 4:15), and Priscilla, who also taught Apollos “the more accurate way” about Jesus.

If women were crucial in leading Jesus’s movement in the very beginning, why wouldn’t they be as crucial in doing so now?

2) WOMEN ARE GIFTED FOR MINISTRY IN THE CHURCH.

Nowhere in the New Testament are the Spirit’s gifts gender-specific. In fact, Joel the Prophet spoke concerning Pentecost, “In the last days, God says, I will pour out my Spirit on all people. Your sons and daughters will prophesy … Even on my servants, both men and women, I will pour out my Spirit in those days, and they will prophesy.” Since we are living post-Pentecost, we can be sure God has poured out His Spirit on all flesh—both men and women. This also includes young, old and people in every ethnic group. The Holy Spirit has gifted the Church with the ministries and offices that it needs for its mission, as well as for the purpose of building one another up.

In 1 Corinthians, Paul addresses both “brothers and sisters” when speaking of the gifts, claiming some will perform miracles, some will prophesy, some will be teachers, others evangelists and even others pastors. These are gifts distributed by the Spirit to both men and women, as God sees fit.

Shouldn’t women use the gifts given to them by God to lead the Church, for its uplifting and edification?
3) WOMEN BEAR GOD’S IMAGE, TOO.

In the creation narrative, men and women were both given an equal responsibility to bear God’s image, have dominion/”rule” over creation, and be fruitful. In both genders being “made in the image of God,” we understand that the fullness of God’s personhood is expressed in not only in masculinity, but also in femininity. We were created to be reflections of God—to speak and act for Him in our distinctions.

This leads to the next point:

It’s no surprise that men and women are different—each having different experiences and different needs. Because of this, we need a diversity of voices in leadership who can guide and pastor men and women and speak to their particular situations. Diversity in leadership is tantamount to authentic discipleship and foundational for healthy relationships and growth within a community of people.

When making important decisions in the Church, female perspectives are necessary to speak into issues that men cannot relate to and don’t have firsthand experience in. No one knows the needs of women better than women. Shouldn’t leadership in the Church reflect the diversity of its members?

Particularly in our current culture, with sexual abuse stories being exposed within the Church, it’s more important than ever for women to be represented when it comes to making decisions in leadership on behalf of the community.

5) WHEN WOMEN ARE EMPOWERED, SOCIETY AS A WHOLE FLOURISHES.

We know that on a global scale, women are among the most oppressed people. In certain countries, many women have no rights in society, are sold like cattle for a bride price, forced into sex slavery and in some places, not even allowed to show their face in public. However, organizations like UN Women and the Organization for Economic Cooperation and Development (OECD), among others, have reported on studies that show how much of a vital contribution—and even complete shift in society—women make when they are educated and empowered.

UN Women found that increased educational attainment for women and girls accounts for about 50 percent of the economic growth in OECD countries over the past 50 years. Over half of this is due to girls having had access to higher levels of education and achieving greater equality in the number of years spent in education between men and women.

Similarly, a study using data from 219 countries found that, for every additional year of education for women, the child mortality rate decreased by 9.5 percent.

These are only a couple statistics among hundreds that prove that women’s equality is necessary for human flourishing. When women are empowered, everyone wins.

If this is true on a grand and global scale, wouldn’t it be true for the overall health and growth of the Church? If women are celebrated, empowered and given freedom to exercise their gifts in leadership as God intends, imagine what it could do for the global Church—God’s kingdom on Earth as He intended—a glorious, united and beautifully vibrant people.