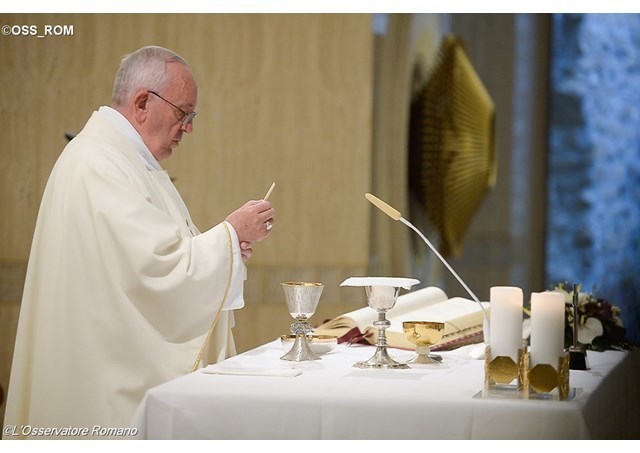 A good word by Pope Francis on the issue of trouble, persecution, and the reminder for God's children to be careful.

"Pope Francis said on Tuesday that "persecution is the Church’s daily bread”.

Speaking during morning Mass at the Casa Santa Marta, the Pope recalled the first Christian martyr – Stephen – and said that “still today so many Christians are killed or persecuted for their faith in Christ”.

Listen to the report by Linda Bordoni:

Pope Francis said “there are bloody persecutions, like being torn to pieces by wild beasts to the delight of the audience in the stands or being blown up by a bomb at the end of Mass” and there are “velvet-gloved” persecutions that are “cloaked in politeness": the ones that marginalize you, take your job away if you fail to adapt to laws that "go against God the Creator."

The story of the martyrdom of Stephen, described in the Acts of the Apostles in the liturgy of the day, led the Pope to remark on how persecution is a reality that has been part of the history of Christian faith for 2000 years.

"Persecution, I would say, is the daily bread of the Church. Jesus said so himself” he said.
He pointed out that there are tourist sites in Rome like the Colosseum which remind us of the martyrs who were killed there by lions. But – he said – they are not the only ones. There are ordinary men and women of today:

“Today, on Easter Sunday, just three weeks ago… Those Christians who were celebrating Easter in Pakistan were martyred because they were celebrating the Risen Christ. Thus, the history of the Church goes ahead with its martyrs” he said.

Pope Francis pointed out that the martyrdom of Stephen sparked a cruel anti-Christian persecution in Jerusalem similar to the persecution suffered by those who are not free to profess their faith in Jesus today.

“But – he noted - there is another persecution which is not much spoken about," a persecution "camouflaged by culture, by modernity, by progress in disguise":
"It is a persecution I would 'ironically describe as polite” he said.

It’s when someone is persecuted – he explained - for wanting to manifest the values of the Gospel: “It’s persecution against God the Creator in the person of his children!”

And the Pope said that every day the powers that be promulgate laws that oblige one to take certain routes and that nations that do not follow these indications or do not want them to be part of their legislation, are accused and politely persecuted. It’s the kind of the persecution that deprives one of freedom, and of the possibility of conscientious objection.

“This – Pope Francis said - is the persecution of the world" that "takes away freedom" whilst “God made us free" to bear witness to "the Father who created us and to Christ who saved us.”

This persecution he said is perpetrated by the prince of this world.

Referring to the “great apostasy” the Pope said that the life of Christians goes ahead notwithstanding these two persecutions.

Urging the faithful to "be careful,” to not fall into the spirit of the world, Pope Francis assured us of his closeness: “I will be with you” he said.